Let me begin by telling you what David told me: “I’m not a watch guy…I’m a car guy.” You’re more likely to find him glued to a flat-screen watching the world-famous Mecum Automobile Auction than catch him awestruck by someone’s wristwatch. Growing up, David was his Dad’s ‘partner in crime’ whenever it was time to buy a new family car. Every few years, they would waltz into a dealership and drive off the lot together in the newest model. When David reminisces about the fleet of cars they owned over the years, including a Porsche Spyder, a flood of great memories overwhelm him about times spent with his Dad.

So it’s not lost on him that a watch, just like a car, can be an object that can strike a chord with someone.  He also ‘gets it’ because he owns such a watch that keeps him forever connected to an earlier time in his life that he cherishes. David inherited his Dad’s gold-filled LeCoultre. He’s been the proud possessor of his Dad’s ‘everyday’ watch for the past twenty years.  Unlike his Dad, David doesn’t wear the watch regularly – its wrist-time being reserved for holidays and special occasions. David was kind enough to take it out of his keepsake drawer and share it with me along with some of its history and meaning. 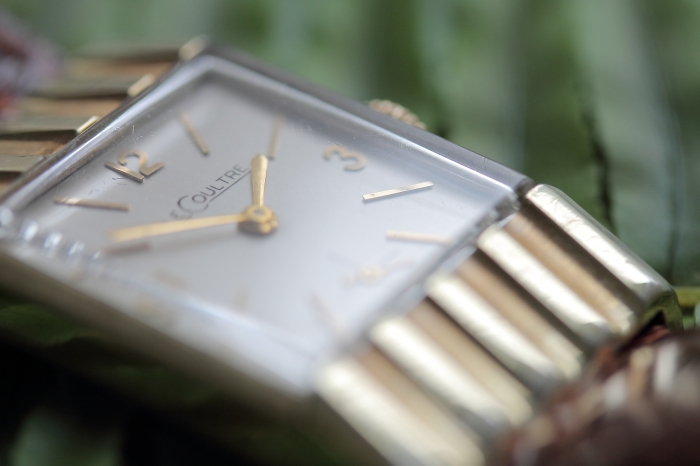 David doesn’t know too much about the watch’s lineage aside from it being his Dad’s go-to watch. Frankly, the facts about exactly how old it is or the circumstances surrounding its acquisition are beside the point of this story: This write-up is simply about what this watch means to David. But, the watch-nerd in me just couldn’t help doing a little digging to provide David with some context.

A Google Image search turned up an old print advertisement that identified the model as the LeCoultre ‘Sultan’ (sold alongside a women’s version called the ‘Sultana’). Since the caseback is the snap-on style, I channeled my inner-watchmaker and bravely popped-off the back. The big reveal: a beautifully preserved, robust Swiss movement with all the correct engravings and hallmarks.  Based on the serial number and my quick-and-dirty research, I feel comfortable dating his Dad’s LeCoultre to around 1950.

David was born in 1946, so this watch has been a familiar object in his life ever since he can remember. In the 1950s, David’s Dad introduced him to the game of golf (a pastime he still plays). When the two would hit the local country club, like clockwork, David’s Dad would remove his LeCoultre and safely store it in a clubhouse locker before heading to the first tee.

A family tradition David fondly recalls is tuning in, every evening, to ‘The Tonight Show’ starring Johnny Carson. The television was in his parent’s bedroom, so when the program ended he always observed his Dad’s nighttime wind-down routine: In a tray on the dresser he would place his wallet, keys, cufflinks, collar-stays, and his LeCoultre.

There were never any deep-discussions between David and his Dad about the watch; serious talks tended to center around cars and sports. But the small, rectangular ‘gold’ watch with the brown alligator strap was always present in the background of whatever they were doing together. 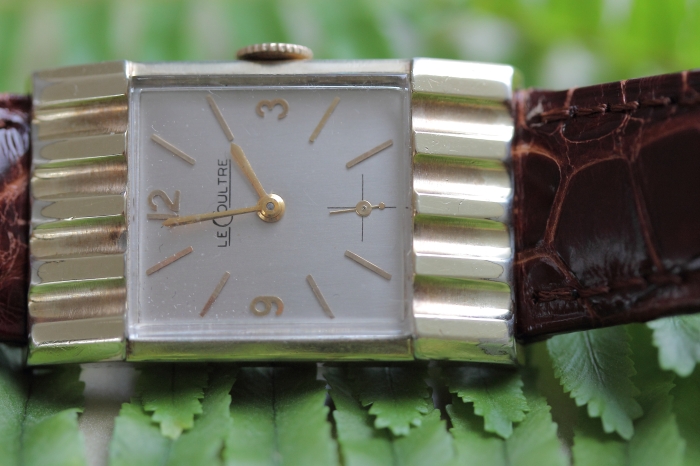 When David does wear his Dad’s LeCoultre, it not only conjures memories of their relationship, but also serves to reconnect him to the era of his childhood. David feels an overwhelming sense of pride having grown up during a time when an “elegance” permeated life outside and inside the home. Back then, even an ordinary ritual like dinnertime had an inherent code of conduct that emphasized the importance of proper manners and presentation: He would have to surrender his hands and fingernails for inspection before chowing down. His Dad, a physician, would leave his tie on for supper. Thinking about his Dad’s shirtsleeves rolled-up, eating at the head of the table, David can’t help but link the ever-present LeCoultre with the values instilled in him that shaped him into the man he became.

Preserving the past is vitally important to David: He still enjoys a burger at White Castle because it evokes good vibes from eating there with his buddies in high school. He shops at Brooks Brothers because his dad use to. So, it shouldn’t come as a surprise to find out David has always taken extra-special care of his Dad’s LeCoultre: Whenever it’s in need of a new band, he always restores it with a similar brown alligator style he knows all too well.

When David first showed me his Dad’s old LeCoultre, he said something to the effect of the watch “not being worth much; probably the band is more valuable…” While the monetary value may be up for debate, the sentimental value isn’t. David “feels different” when he wears it. He admits he’s self-conscious about it; if something happened to it, the loss would be difficult to replace. It’s a small memento that serves a tremendous purpose. Besides keeping him on time, glancing at his Dad’s LeCoultre helps him replay events of his life. On especially difficult days, just holding his Dad’s watch has a calming effect on him.

A lot of us – especially the older we get – wish we could freeze time or go back in time to savor an experience a little longer…The best we can do is rely on our memory. It’s ironic that for David, a watch is one of the things that transport him to days gone by.