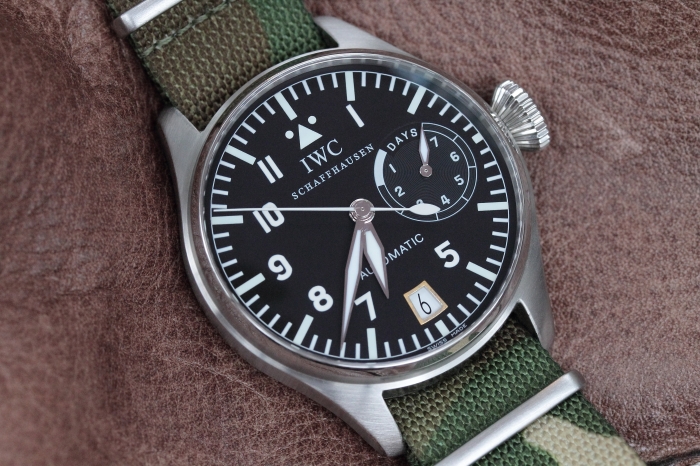 Most watch lovers would be seriously tempted to trade day jobs with Saul. He works at a prominent watch boutique and spends his day doing what he loves: Educating people about watches. From the very-second a customer walks through the door, his friendly approach and vast knowledge of watches earns their trust – and most of the time – he sells them a watch. But before Saul got keys to the display case, he was a watch enthusiast and buyer – like most of us.

He bought his first ‘nice’ watch in 2002 – an IWC GST chronograph in stainless steel. In his early days of watch-buying, Saul based his purchase decisions primarily on looks and feel. He developed a taste for “big” watches, which explains how several Panerai models found their way into his collection.

One day – in the mid-2000s – Saul had a chance encounter ‘in the wild’ with a gentleman who was wearing a limited-edition, first-generation, platinum IWC Big Pilot’s watch with an intense blue dial. This man couldn’t have been any nicer: He removed his watch and allowed Saul to get up-close-and-personal.  At this very moment IWC’s Big Pilot’s watch became his grail – however, in the more pedestrian, stainless steel version.  From this day forward, Saul was crazy about the aesthetics of the Big Pilot’s watch. He couldn’t get enough of seeing it on the pages of magazines and catalogs.

He finally got the opportunity to acquire his dream watch just as he was beginning his career selling watches: It just so happened that his best friend – who owned a Big Pilot’s watch – needed to sell it for personal reasons.  He knew how much Saul wanted one, so he offered to sell it to him.

Saul thought he knew the Big Pilot’s watch inside-and-out. That was until he inspected his friend’s. A small detail caught him off guard: The date indicator at six o’clock had a slightly-tarnished, gold-toned border.

Because this was the first “collectible” watch he was pursuing – one he had no intention of ever selling – he enlisted a good friend to help him research the originality of the gold frame with patina. After comparing notes from various Internet forums and reaching-out to the IWC collector community, the mystery of the gold-trimmed date window was solved:  Saul learned that the gold-accent was born to the dials of very-early examples. Saul’s Big Pilot is a reference 5002 and its serial number dates it to one of the first batches ever produced.

With that issue resolved, he next turned his attention to the blotchy discoloration of the gold: The last thing Saul wanted to happen was to get stuck with an original – but defective – dial. Luckily, he discovered that the aging finish of the gold was a very-common – and natural – occurrence that was well-documented happening to the very first Big Pilot’s watches.

These confirmations provided Saul immense ‘peace of mind’ to proceed with seizing his grail. However there was one more hurdle to clear: His friend was in need of cash, but Saul preferred to trade. He offered two – highly liquid – Panerai models in exchange for his friend’s Big Pilot’s watch. Saul has always been an astute watch buyer, so his friend accepted the trade knowing he’d have no problem selling them to a dealer or third party.

With the Big Pilot’s watch securely strapped to his wrist, Saul no longer had to turn to one-dimensional billboard advertisements or magazine images to get his fill of IWC’s signature timepiece. Even seven years removed from the monumental purchase, he still can’t believe his good fortune to obtain a first-series, reference 5002.

Although Saul has become well-versed in the technical features of watches, he still has a soft-spot for their simple wrist presence. When it comes to his Big Pilot’s watch: It’s probably one of the most unassuming, unimposing ‘large’ watches out there. Its 46.2mm diameter is very easy on the eyes. The reed-thin bezel turns the dial into more of a ‘canvas’ where  the numerals, indicators, and text are highly legible, evenly-spaced, and not cut-off as often happens when manufacturers try to cram a lot into a smaller space.

Saul finds beauty in the clean, balanced layout reminiscent of IWC’s original Big Pilot’s watch of the 1940s that was inspired by the gauges found on the instrument panels in airplane cockpits. In that day and age, flying – whether commercially or during wartime – was precarious and had an air of romanticism, bravery, and adventure associated with it. Saul feels proud that his Big Pilot’s watch so-closely resembles the stripped-down, tool watch that aviators depended on. 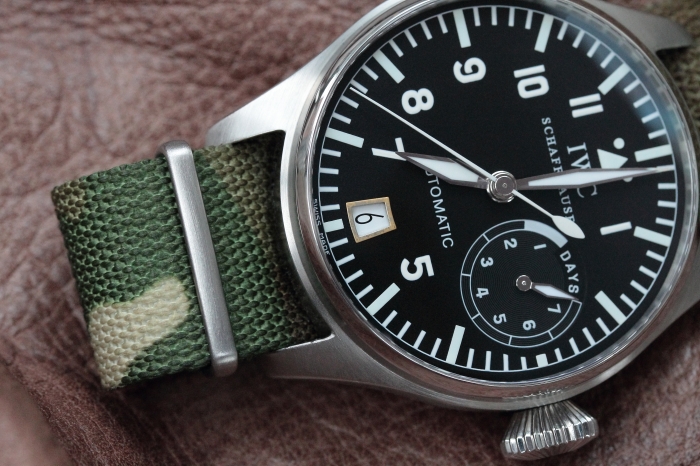 When talking about his beloved Big Pilot’s watch, Saul is quick to point out the diamond crown, or as he likes to call it: The “onion” crown. Among the practical, no-frills features of vintage Pilot watches were the oversized crowns and lack of crown guards that enabled pilots to more-easily set and wind their watches while wearing bulky gloves.

IWC’s early-efforts to recreate this emblematic design was met with mixed reviews: The crowns on early Big Pilot’s watches – recognizable by the raised ‘fish-like’ logo on their top, were prone to breaking easily: Because the crown is so pronounced, the user is inclined to exert more force when tightening it closed. If not careful – the leverage created by being able to fully-grip with one’s fingers can exert the requisite torque to overtighten and strip the threading.

At the very-beginning of his ownership, the ‘fish’ crown on his Big Pilot’s watch became a casualty to this susceptibility: The same friend who ‘lent a hand’ with researching the gold-outlined aperture on the dial accidently over-turned the crown as he was attempting to align the ‘fish logo’ parallel to the side of the case. Saul had to go without his Big Pilot’s watch for ten weeks as it underwent repair and was outfitted with the new-and-improved ‘Probus Scafusia’-inscribed crown. 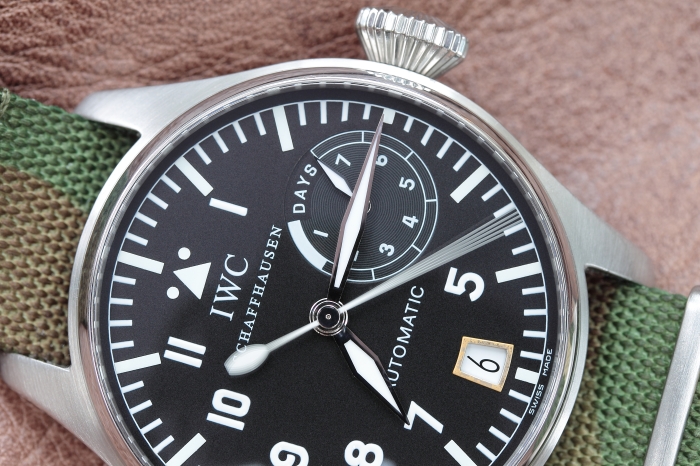 Ever since his Big Pilot’s watch was returned from being serviced, Saul has grown more attached to it. He’s turned-down generous cash offers from fellow collectors. He’s even graciously-declined trading it for a newer Big Pilot’s watch plus a Panerai.  Right now, he can’t fathom parting with it…

Part of the reason it’s so special to him is that – as a collector – he relishes having a first-generation example. Saul takes pleasure in the subtle, rarer details such as the aforementioned golden date window and the number ‘9’ marked on the dial. In addition, his Big Pilot’s watch has the hypnotic, slow-beat movement: That is, the seconds hand ‘ticks’ only 18,000 times per hour versus more-traditional automatic watches with second hands sweeping at a rate of 28,800 vph. 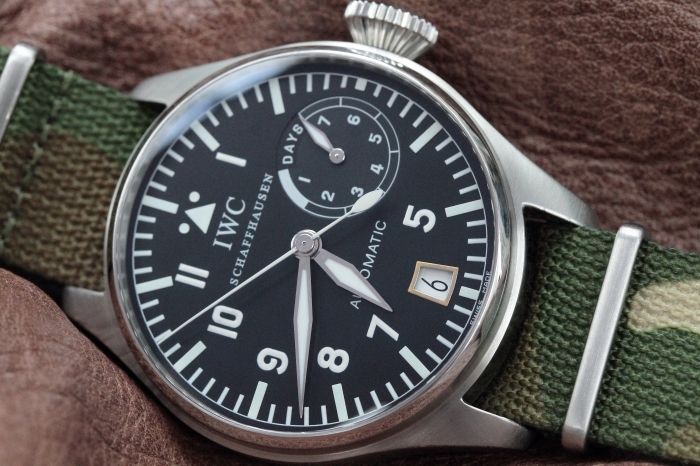 Although he’s uber-proud to show off the finer points of his Big Pilot’s watch, he takes even greater pleasure in explaining how the circumstances surrounding its acquisition back then set the tone for how he does business now:  By being well-informed after doing his “homework” he became comfortable moving forward with the deal. Over the years, he’s built on this approach by continually educating himself about watches, believing in his expertise, and passing on his know-how to instill confidence and build rapport with his customers.

This strategy has served him well: Much – if not all – of his growth as a salesperson he attributes to his personal experience with watch collecting.